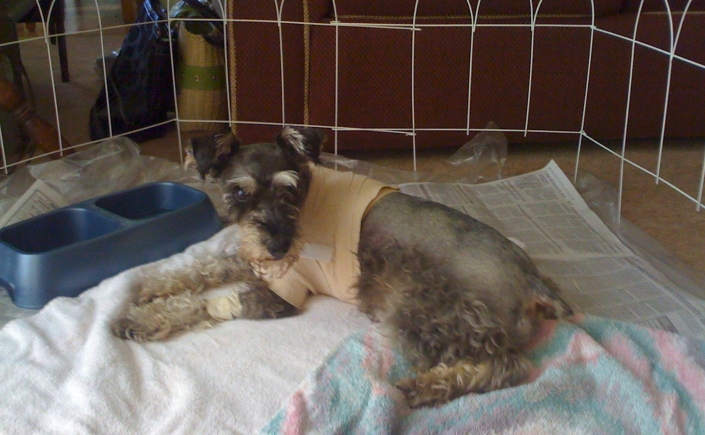 I’m on a roll! Three blog posts in one day! In my previous post, I shared the incredible outcomes from attending the Exponential Church Planting Conference in Orlando. Well, here’s the rest of the story…

While I was at the conference, Suzanne, our 3 kids and our miniature schnauzer Dusty were with her folks in Macon. Tim and I had just gotten on the Florida Turnpike headed home when I received a call from Suzanne in complete hysterics. I quickly pulled the van to the shoulder and my heart began to race. Something was dreadfully wrong but I couldn’t understand her because she was so upset. The first thing I could understand was, “Don’t move him!” Instantly, my mind created a scenario that my son Ethan had been horribly injured or killed. My heart rate shot through the roof. Finally, Suzanne was able to tell me that it was actually our dog Dusty that had been injured. He was brutally attacked by a stray German Shepherd my in-laws were keeping in their yard until they found a home for it. It took Suzanne, her dad and her brother nearly 2 minutes to get Dusty freed from the jaws of the other dog. They broke patio furniture over its back and it just would not let go. Finally, they grabbed a large patio umbrella and after two good licks, the dog let go.

When they got Dusty to the vet, he took one look and said he didn’t think there was anything he could do. He said it looked like Dusty’s spine had been broken and his ribs pulled away from the spine. He was bleeding profusely from deep bite marks across his shoulders and back. He had also been bashed repeatedly onto the concrete as the dog violently shook him. It looked as though we were going to have to put him to sleep. The kids wailed in the background. I was 6 hours away and felt completely useless to help. All I could do was pray.

The vet decided to do an x-ray and to his complete surprise found that Dusty’s spine was intact! He had two broken ribs–one on each side. They wrapped him up in an ace bandage, put him on pain meds, antibiotics and a drip IV. We checked on him two hours later and he was still alive. Then, just before closing–still alive.

The next morning–still alive. Past the 24 hour mark–still alive! Through the weekend–still alive! We brought him home on Monday. He is pitiful, but he is alive and getting stronger each day! My kids (and Suzanne and I) couldn’t be happier. It is amazing how quickly a dog becomes an integral part of the family. The days we were home and Dusty was at the vet, our kids moped around all day. We missed him terribly! The vet was quite amazed that he survived. He even used the word “miracle” with me. I know it seems trivial when you look at the Kingdom of God and all that, but I really believe that Jesus heard the desperate prayers from 3 very sad little children (not to mention 1 very upset mom and 1 very sad dad driving up from Orlando!). One verse came to mind – Matthew 10:29 “Are not two sparrows sold for a penny? Yet not one of them will fall to the ground apart from the will of your Father.” Aren’t you glad we can pray to God for something like our family pet and know that He sees and cares about what is happening? I truly believe that Jesus was present through the whole situation and ministered to me, Suzanne, my kids and, yes, Dusty the miniature schnauzer. Ain’t God cool?

This past Thursday, Tim and I returned from the Exponential Church Planting Conference held at First Baptist Orlando. I can honestly say that it wasn’t what I had expected–it was far better! Keep in mind that I attended this conference last year with Dogwood Church. We were exploring the multi-site strategy that churches like Community Christian in Naperville, IL, had pioneered. God had been stirring some things in my heart and this conference really got the ball rolling. Alan Hirsch, Ed Stetzer and Tim Keller all had incredible things to say about the status of the Church in North America and what needed to change. It resonated deeply with me.

Just one year later, I attended the same conference having already planted a church–browns mill church in Newnan, GA. Not only that, but we were staying with the authors of The Tangible Kingdom (a book I highly recommend). Each night, we stayed up past midnight discussing the status of all things missional and how their organization Missio could keep up with the demand they are experiencing for the training and materials they have to offer. In fact, at the conference, several networks, denominations and megachurch pastors sought an audience with Hugh & Matt (the TK authors) to learn more about moving toward being missional.

Hugh & Matt quickly came to the realization that they were not going to be able to keep up with the demand on their own, so they have recruited several guys (Tim & I included) to serve on the national leadership team of Missio. We will be coaching church planters through the MCAP (missional church apprenticeship practicum), and providing general leadership to various aspects of Missio at both the national and regional levels. It is so exciting to be on the ground floor of where God is moving!

Back to the conference… We got to hear some of the speakers (Francis Chan, Erwin McManus, Bob Roberts), but the majority of the time, we were working the Missio booth in the resource area. I spoke to so many people whose journey is so similar to my own–God had begun to stir a holy discontent within them about the status of the church in North America and they were studying the Scriptures and found that the “missional” movement seems to line up more with God’s original intent for His Church than the “attractional” methods used today in most churches. It really has been an exciting ride so far! It is amazing to see God lining everything up. We see Him working all around us in such amazing ways. Interestingly, the one last piece that needs to be lined up is our funding. However, we believe the promise in Matthew 6:33 and are seeking His Kingdom first and trusting that He will add to it everything else!

Now, regardless of what you think of Dr. Falwell, whether or not you hold to his same beliefs or agree with everything he said, you cannot disagree that this man made a tremendous impact with his one lifetime. He impacted my life in so many ways: 1) It was at Liberty where my faith became my own and not just something I “inherited” from my upbringing. 2) Liberty is where I was exposed to and eventually called to full-time ministry. 3) I many life-long ministry friends at Liberty 4) I had an incredible time serving on ministry teams–YouthQuest and Sounds of Liberty–and traveled all across the country and even to Brazil with these teams. 5) I had the opportunity to get to know the Falwell family on a more personal level than most students as a member of the Sounds of Liberty. 6) I met my wife at Liberty. I could go on!

After news reached me of his death, I began to reflect on the impact he had with his one lifetime and I clearly remember asking God, “Am I where You want me to be to make the most of my one lifetime?” It didn’t take long for God to clearly impress upon me that, no, I wasn’t currently in the ministry position that would have the maximum impact for God’s Kingdom. However, He didn’t reveal what that next assignment was going to be for 18 months! It was a very difficult, soul-searching 18 months, needless to say! I wish I could say that I handled that time period with great faith and without sinful attitudes, but that would not be true.

Fast forward to today… I have no doubt that I am doing exactly what God wants me to do. I see him working all around me in ways I’ve never experienced in almost 14 years of ministry. He has softened my heart and given me a passion for those who don’t yet know Jesus and are all around me. He has led us to help plant a church that is attempting to go against the consumeristic Christianity that is so prevalent in our American culture. He has given me an “apostolic” type role (a leader of leaders and trainer of trainers) through our involvement in Missio. I can see how He has lined everything up… well, almost everything. After serving as a worship pastor for over 14 years, I can’t go back to that profession, at least not the way it has become defined in the typical American Church. To spend 40-50 hours a week producing a weekend worship service that gets consumed by an audience but has little if any life changing affect on them is not how God would have me spend my one lifetime. He has called me “to live like Jesus and to lead others to do the same” (browns mill church mission statement). The problem is that that is the only way I know how to make my living and my resume has 14 years of church music on it. So, the one last thing that I’m praying, waiting, seeking and begging God for is how He is going to meet our daily bread needs? I have a career–my career is that of executive pastor of browns mill church and to train other church planters and coach them in planting missional communities across the country. These two things are not able to pay an income at this time.

I can identify with Abram and many other Biblical heros who followed God’s call into the unknown. It is scary, risky and frustrating, yet surprisingly fun, exciting and adventurous! There’s no other way to live! I told God that if I were writing this part of His Story, I would bring the funding in so that I could devote all of my time and energy on browns mill church and training church planters through Missio. However, God rarely operates in the logical (at least human logic). His ways are higher than our ways. Please join me in praying that God would either provide a job for me (soon!) or bring funding in for browns mill church and/or Missio that would allow us to put all our time and energy into these two promising ministries. Thanks for reading!